For very obvious reasons, feral horses prefer to be in wide open spaces, where they can detect threats from as great a distance as possible. Other needs - for food, water, shelter and so on may take them to less open spaces where they will be more vigilant - predators may lurk there.

When I built my yard, I wanted to provide adequate shelter from the scottish winter weather, but also tried to keep it as open as possible so it would feel like a safe place. And they look very relaxed and happy in the yard, and come in from the field to rest and doze.
As the weather turns, they have been spending more and more time in the yard. However, coming up the morning after fireworks night, it was interesting to see that they had hardly been in the yard. It was clear that they had spent the night in the most wide open area of the fields. Maybe seems obvious, but I thought it worth commenting on. Our view is often that a stable is a place where a horse can feel and be safe, and depending on the horse's situation and past experiences this may be the case, but often if the horse senses danger a wide open space will feel much safer.

Of course, horses did not evolve to cope with traffic, fences, and thousands of other hazards in the environments we keep them in. Where a horse will actually be safe, may be different from where he will feel safe, but his emotional state and possible responses to feeling endangered are an important factor to consider. 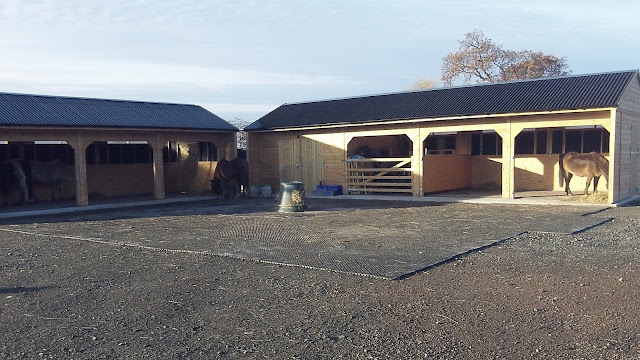 Spending quality time with your horse

Got a message from a past student a couple of days ago with a very well put observation.

Over last summer she had done a lovely piece of training with her horse to help him with his worries about trailer loading - very slow and observant, really listening to him and taking things at his pace.

He had been a bit 'off' coming out of winter, and she was keeping an eye on him, looking for something to perk him up. For various reasons, as the trailer was out, she decided to try loading him. He did brilliantly, and the next day was full of enthusiasm when she arrived. Her comment was 'it's amazing how spending some quality time with him made him so happy'.

When I first got involved with horses, I think I'd have considered quality time with them as going out on a long hack, or maybe grooming - but more from the perspective of what I enjoyed, unless the horse was really clearly unhappy about the activity! A trailer loading training session definitely wouldn't have been on the list.

I've seen this often, how working at the horse's pace through a fear issue can transform a relationship, and also this training becomes something they really enjoy. The phrase 'quality time' was so accurate; when we can slow down and really pay attention to them and help them feel better about their worries in life, it can mean so much to them. And we can then bring this pace and attitude to other areas of our work with them, and build on a solid foundation.
Posted by Felicity at 15:10 No comments:

Some thoughts on negative and positive reinforcement

Most of us, if we learn about learning theory, quickly become familiar with the following:


Negative reinforcement : the removal of something aversive from the environment as a consequence of a behaviour, making that behaviour more likely to occur in the future.

Positive reinforcement: the addition of something rewarding into the environment as a consequence of a behaviour, making that behaviour more likely to occur in the future.

Negative punishment: the removal of something appealing from the environment as a consequence of a behaviour, making that behaviour less likely to occur in the future

Positive punishment: the addition of something aversive into the environment as a consequence of a behaviour, making that behaviour less likely to occur in the future.

Then, we categorise the training and learning we see. We give our horse a polo when he touches a cone, and say we are training with positive reinforcement. We form biases about what kind of training is good and what is bad. Taken to an extreme, we form opinions about whether people are good or bad based on the kind of training they do, but that's a subject for another day!

So - a couple of thoughts on positive and negative reinforcement.

Is it positive or negative reinforcement?

Let's say my horse Paddy has an itchy leg - he finds a tree stump, lifts his leg and rubs against it, removing the itch. We would generally describe this as negative reinforcement - the irritating itch has been removed by Paddy's behaviour - rubbing the tree stump.

Now, let's say Paddy has an itchy leg and lifts his leg while I am grooming him. I reach down and scratch his leg for him. Is this positive reinforcement - I am adding a pleasant scratch, or negative reinforcement - removing the itch as in the previous case. Does Paddy learn any differently in the two cases above?

Since it is the horse who is learning, it only really matters how his brain processes these two events - my opinion is unimportant in his learning process! But I'd be more likely to call the latter case positive reinforcement, because I added a good consequence.

So already we see a grey area in how we classify the learning.

To take an example involving a human rather than a bit of wood - let's say Paddy comes hobbling in from the field. He has a big stone trapped in his foot which I removed when he lifts his foot for me. We'd usually describe this as negative reinforcement - I've removed something aversive, and this was probably a very good experience for Paddy.

When we are considering the effectiveness of training, then understanding the mechanics of learning is important.

When we are considering the ethics of training, a major factor is how it feels to the learner, rather than how it affects their behaviour. Using a model that describes how their behaviour is affected to describe how they may feel is, I think, not enough.

What really matters, I think, is how the horse feels about interaction we have with him.

To take an extreme example, if we apply a painful stimulus to our horse then release it when he behaves as we wish, we are using negative reinforcement, but it is the active application of a painful stimulus that we should be concerned about, not the learning mechanism. Whether the aversive stimulus is applied before or after a behaviour, or entirely at random, for myself, I'd like to minimise these stimuli. I'd also like to increase the things he finds nice, whenever they happen!

Posted by Felicity at 08:59 No comments: