My horses have a field shelter in a yard (so that's really a ‘yard shelter’ I guess), which opens onto their fairly huge, hilly field. The yard is maybe 20M by 30M – a big enough space for them to move around in, but not enormous. They are given hay and feed in the yard in bad weather, as conditions are pretty rough out in the field (that whole living half way up a Scottish mountain thing again…) 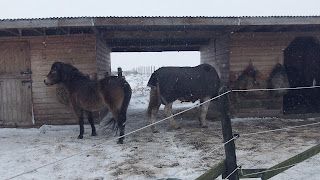 I’ve been watching their use of the field over the past few weeks, in a variety of weathers – snow, wind, rain, occasional crisp sunny days. As these horses have the choice of staying in or going out, it's interesting to see what they do. I don’t watch them 24 hours a day, so I can’t say for sure what they do when I am away, but here’s what I have seen.

Flynn, the arab, hasn’t been out of the yard for weeks! He’s quite sound, happy to go and belt about loose in the school, or go out for a walk, but just looks quite content hanging about the yard. We know he hasn’t been out in the field as he has some cream on his leg just about his hoof, and it is untouched, legs are beautifully clean! 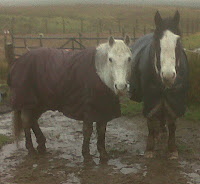 From the mud on their legs, I know that Benson and Paddy, the other two old gentlemen have been out in the field, but I haven’t seen them doing this. 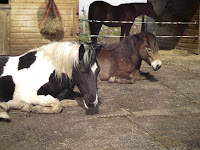 Tigger and Elvis, the youngsters, go out for short spells to play, then come back in to doze and eat.

When it was snowy, I could follow their tracks into the field, and none of them had ventured more than about 60 metres from the yard, although they had clearly run about a fair bit in this space.

I can also tell from the amount of poo picking there is to do in the yard each morning, how much they are in - right now, unless they are coming in to use the 'indoor toilet' then going out again (unlikely!) they are pretty much staying put in the yard.

So, although they all behave a little differently, none of the horses are too interested in wandering around a large, bare field at this time of year. Their priorities are sticking close to the hay (they rarely stop eating for more than 1 hour at a time), and sticking close to each other. They also move about a lot, within this reasonably small space – the youngsters, occasionally joined by ancient Paddy will canter, chase each other, rear, buck – in general have a play quite often, whilst the older boys usually just amble from one lot of hay to another.

Conclusions? As usual, I can’t generalise from such a small group of horses and limited observations. But what do this bunch want most at this time of year?

To eat in the company of good friends - all day long :-)

Space to move about is also very important, but they don't want to just stretch their legs for 8 hours at a time. Horses who are turned out alone all day with no forage are often described as 'not liking' turnout, because they quickly grow tired of it and want back in. Provide an environment outdoors that they enjoy (and that'd definitely include forage and company) and I'm sure they would quickly change their minds! Stabling 24/7 for weeks on end because they 'don't like turnout' should not, in my opinion, be considered as a reasonable management option.

Consider a question: when would you expect to see more ‘arguments’ over access to hay between a group of horses – 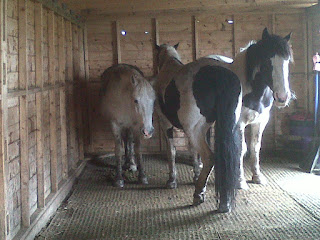 You might well expect there to be more problems with the horses ‘sharing nicely’ on the horrible winter’s day – after all, we know that horses have a social hierarchy, and that this hierarchy determines who gets the best access to food, so we might think they will all be out for themselves and the most ‘dominant’ horses will get the lion’s share of the food.

However, what I notice with my group of 5 is that when their other needs are fulfilled (i.e. they are warm enough, not particularly hungry or thirsty, feeling safe and physically comfortable and so on), they will ‘squabble’ on and off – moving each other off the hay, competing for water, and 'evicting' each other from the field shelter. They are not engaging in what we would normally call play here (although they do this as well) – they are telling each other what to do, albeit in a fairly low-key way.

On a miserable day, when they are hungry and would rather be in the field shelter than outside, they tend to settle down and share peaceably – nobody is told to leave the shelter, not even the most minor of threats are issued, they approach each other and share hay without any issue of 'social rank' appearing to be considered.

What does this tell us? There are lots of theories we could call on here – about  friendship, bonding, sharing and so on. But I wouldn't want to generalise - this is one group of horses, observed by one person.

All I’ll say is that trivialising horse’s social lives into some simplistic quest for ‘dominance’ does horse-kind a huge injustice.
Posted by Felicity at 14:54 No comments:

A wee while ago, I wrote something on natural behaviour, and used this very unflattering photo of Flynn. Just to annoy his owner, Eileen, here it is again! 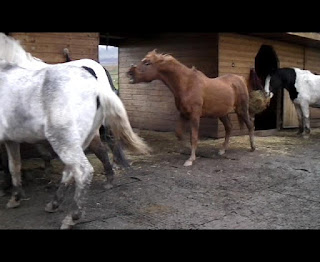 Seriously, thought this showed some behaviour worth thinking about. What is Flynn up to here? He’s clearly driving the other horses off their hay, and is looking pretty full-on about it. So, we could say this is dominant behaviour, Flynn is ‘boss’ of those other horses and leave it at that.

But, why is Flynn doing this? Just because he can move the others around if he wants to doesn't explain why he is doing it now. Is he just evil? J. Does he want their hay? Have they been ‘disrespectful’ to him?...

Actually, if you take Benson (far right, concentrating on the serious business of eating as usual) out of the equation, Flynn will share peaceably with the other horses. Also, if you put all 5 horses out in the field with hay you won’t see Flynn doing this.

Benson has a habit for just going where he wants, when he wants, and everyone else better move. He doesn't overtly threaten, but they all clear a path for him. So, Flynn knows if Benson  comes his way, he’d better move. With several other horses in the yard, I think he is anxious about his ability to move, worried about being trapped between horses. He could leave the yard if he wanted, but being out in the field alone isn't a great option either. So, his ‘dominant’ behaviour is caused by him feeling uncomfortable and unsafe about his situation.

Worth thinking about if your horse tries to move you away, or objects to what you are doing (hopefully not as vigorously as Flynn is doing in this picture!). Have a think about why he’s telling you to back off, then you can address the cause of the problem, rather than just telling him to shut up and behave!
Posted by Felicity at 15:24 No comments: