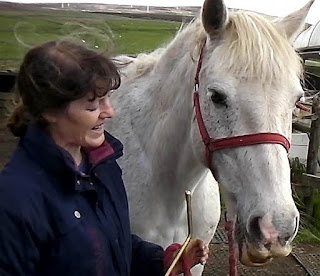 Came across this video I took a couple of years ago. Tigger meeting Duke, the stallion who lives at his yard, for the first time. Tigger's posturing is obviously attention grabbing. You can look up any good book on horse behaviour and find descriptions of this kind of sequence of behaviour. But what I find interesting is the more subtle interactions.

For example, at the start of the video, the older, wiser Paddy (grey) is not particularly interested in Duke, it is clear that his communication is with Tigger (the touch behind the elbow, then sniffing). He moves a little way from Tigger then waits until Tigger joins him. When Tigger then turns back to Duke, Paddy considers going with him but doesn't. There's very little written about these kinds of interactions.

I would say it looks very much as if Paddy recognises that Tigger's interactions with Duke aren't very wise, and is suggesting that Tigger should move away/calm down. It's a shame that the moments which bond horses, or demonstrate an existing bond, are not given more attention.
Posted by Felicity at 15:02 2 comments:

What's in a whinny?

I love just watching horses - and there's always something new to ponder. So today - the whinny.

The whinny is generally described as a way for horses to maintain or regain contact with each other and also as a friendly greeting. It's an effective way to attract another horse's attention over a distance, and emotions can certainly be transmitted through frequency of whinnying and different types of whinny.

I think the whinny can convey more than simple communications like 'I'm here and excited' or 'where are you, I'm scared'.

Getting video of a really interesting example isn't easy - but here's a fairly basic one. Paddy is often observed 'managing' the social life of the horses in his field - herding 'his' mares away from the other horses, and breaking up interactions between certain horses.

In this case, Paddy is some distance away from one of his field mates who is talking to a pony over the fence. Paddy hears a squeal, whinnies in response and continues to watch until the interaction is over. I have seen more extreme examples where a play fight is turning a bit serious, and a distant whinny from Paddy breaks it up immediately. This whinny could simply be attracting the other horse's attention and thus interrupting their behaviour. But I do think there is more being communicated than that.

Posted by Felicity at 13:39 No comments:

So, seems a bit off topic, but I'm reading a book just now on psychotherapy. Lots of ideas in there for anyone who is teaching/coaching, for example the importance of relationship between teacher and student -  creating and maintaining an environment in which the student can learn rather than , say, trying to push information into them regardless!

Over the years, one thing I've had to work on is saying less! The desire to give someone 'useful' information and help them leads you to do and say too much, where often giving them the space to work things out is more productive.

But the bit that really caught my attention - a story about a man who had been coming for therapy for months, mostly about his failing marriage, but had not revealed he was having an affair with another woman! His desire for the therapist to have a good opinion of him was stronger than his desire to work out his problems and change.

So, this obviously isn't about horses, but my horse-obsessed brain draws parallels... I have suffered from something very similar when getting help from people whom I respect - I very much want them to have a good opinion of me, so consciously or not, you try to hide what you think are the 'bad bits'. You don't ask the 'silly' questions for fear of sounding stupid, you maybe don't ask to work on the weakest bit of your riding because you know its a big mess, and you'd rather work on something that looks at least passably good!

Being aware of this tendency (if you have it), being aware that it isn't helpful and will actually slow down your progress, and also being aware that a good trainer/coach/teacher will not be judgmental and think less of you for being willing to expose and tackle the weakest areas, but will be pleased to help you through them... all very important.

As usual, not quite sure where I'm going with this, have nothing profound of my own to add, but may strike a chord with some of you, as it did with me, whether you are teacher or student...
Posted by Felicity at 02:45 No comments: