Some thoughts on the loss of a horse

A few wee thoughts on how the loss of Benson has affected my other horses. Benson came to me in 2002, Paddy and Tigger arrived in 2003. Flynn has known Benson since 2002, and Elvis since about 2008 - so a long time for all.
Benson died of heart failure 12 days ago, as peacefully as can be.
Initially, all horses looked exhausted. Paddy and Tigger particularly were standing dozing, knees kept buckling but neither wanted to lie down. About 2 - 3 hours after he died huge bout of eating hay. I would guess that they hadn't ate or slept the night before, I can't say how ill he seemed but I think they knew.
I left Benson's body in the field shelter for a few hours after he died, interestingly they didn't come in much while I was in the shelter but once I disappeared to pick up poo in the field they all went in. Shortly after they had gone in, Flynn herded the rest of them out and spent some time alone with Benson.
It's the first time I've had a chance to do this, and I'm glad I did. After he left, there was no calling, no searching for him; they knew he was gone which I think is probably better.
Things are getting back to something like normal now, but they still don't spend time in the shelter where he died, they all use the other one. I was slow to notice this and change haynets around so they aren't having to eat somewhere they don't want to be.
Also, they are sticking much closer to each other. Usually one will go out an graze alone quite happily while the others stay in, or one will stay in alone. Just now they prefer to be in a close group, and graze as in the photo - close together, where they'd normally spread out. 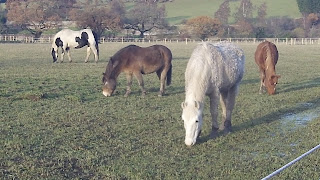 Nothing I can do to make it better really, but there are things I can do to not make it worse. I wouldn't, for example, take one out for a ride alone, or separate them off for any other reason. And I can see where they prefer to be and provide food and water there.
These changes are easier to notice when a horse has died, maybe because you're expecting change and feeling the loss yourself. But they will also happen when a field mate leaves; we think a lot about how to introduce new horses, but not so much about the impact there may be when one leaves.
Posted by Felicity at 10:33 2 comments:

A thought on orphan foals

So, this is just more random musing...

The young of some species are coprophagic, meaning they eat faeces. There are various theories about why they do this. Foals eat their mothers faeces. So do baby rats!

TM Lee et al. Physiol Behav 33 (3), 385-390. 9 1984.
The abstract says 'Preweanling rats selectively approach and consume pheromone-containing maternal feces. This selectivity suggests that the consumption of maternal feces might be important for the growing pup. Previous research suggested that such feces might promote brain development. A series of experiments was carried out in which pups were denied access to maternal feces. These pups were clearly inferior to control pups in brain growth and neurobehavioral maturation, as well as in the quantity of brain myelin.'
Interesting - often hand reared foals have behaviour problems, and we tend to put this down to the absence of other horses to teach them social skills, stress, our inadequacies in training them and so on. But I wonder if the simple lack of the building blocks necessary for normal brain growth and behavioural development plays a significant role?

Posted by Felicity at 13:18 No comments: