A little bit about a big word - Anthropomorphism

Firstly, what is it? The Oxford English Dictionary defines anthropomorphism as

‘the attribution of human characteristics or behaviour to a god, animal, or object.’

There is a prevalent view that we shouldn't anthropomorphise about horses. From behavioural scientists to natural horsemanship gurus, all sorts of people will emphasise the dangers of attributing human desires, emotions and characteristics to horses, as doing this can lead us to dangerously inaccurate explanations of our horse's behaviour and to managing and training them in ways that are ineffective, dangerous and bad for their welfare.

I am 100% behind the idea of avoiding anthropomorphism. Like most of you, I've noticed that horses are a bit different from people, and we shouldn't make assumptions about their motivations, needs, or feelings based on our own. Indeed, we know that their needs are often significantly different from ours.

To keep it simple, I’ll just deal with emotions here, and start with a real example.

I'm chatting to a client, and she says she feels her horse was grieving when her field-mate died. Then she apologises and says that another trainer has already corrected her for saying this, telling her that she shouldn't attribute human emotions to horses.

This isn't an isolated example – I hear this quite a lot – people are defensive, apologetic or a bit embarrassed to say they think their horses feel love, grief, happiness – a whole range of emotions.

So, this other trainer was quite right, in my view, in saying that we shouldn't attribute human emotions to horses. BUT who said that grief is an emotion that belongs to humans? Well, humans said that of course, and we've got an impressive track record for claiming ownership of things that should not be exclusively ours J

How humans claimed ownership of emotions is beyond the scope of this article – and, to be honest, beyond the scope of my knowledge! Philosophy, science, politics and religion have all influenced our reasoning over many centuries. In the 17th century, Rene Descartes argued that animals are automata that might act as if they are conscious, but really are not so – all their behaviour can be explained in purely mechanistic terms, and to this day academics are still putting forward arguments that animals do not necessarily even experience pain! 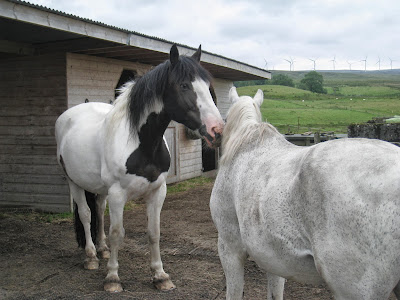 Maybe we can’t ‘prove’ what emotions our horses feel, but absence of evidence is not evidence of absence. We don’t even know much about the emotions other people feel – how do we know that two people who say they feel upset are feeling the same thing? But we listen, we observe, we draw on our own experiences and we (hopefully) do our best to understand what other people are feeling.

So fine, don’t attribute human emotions to horses. But be very sure that the emotion you are talking about is definitely exclusive to human-kind before you decide your horse couldn't be feeling it!

And don’t let people make you feel airy-fairy or sentimental for considering that your horse may have a more complex emotional life than we generally give them credit for.