Are you too heavy for your horse?

I just read a piece in a horse magazine about the maximum weight of rider that a horse should carry. This is a topic that has cropped up in the equine press quite a bit recently, and it would be easy to get confused. The British Equestrian Veterinary Association (BEVA) say that riders should weigh no more than 15% of their horse's weight. A recent study in Japan might lead you to believe that this figure is actually 29%!

To take a practical example, say your horse is 15.2hh and weights 500KG. BEVA would say the rider should weigh no more than 75KG (11 stone 11), the Japanese study would say the maximum weight was 145KG (22 stone 11)! A huge difference, and not very helpful.

The Japanese study looked at one breed of horse only, in walk and trot, and so it would be dangerous to generalize from this. But can we find some general ‘rule’ to work out how much weight a given horse can carry?

The short answer is no - every horse is an individual, and there are so many factors that determine how much weight an individual can carry that it is, in my opinion, impossible to generalise.

Considering a practical example of the weight carrying abilities of humans may help to clarify my point of view.

Two brothers, Jack and Jim, used to deliver hay to me. They were both in their 80’s, probably about 5ft 8 ish, medium build. They would merrily unload 100+ small bales of hay and stack them in the shed, at an impressive speed. So they were able to carry much more weight than you would expect, and for much longer. Why?

Mainly, I guess, because they had been doing it all their lives. Their weight carrying technique was clearly good, they had the right muscles for the job and so on.

I’ve seen bigger, younger, fitter people who definitely couldn't do this without risking an injury.

The same applies to horses, I think. You can’t just look at their weight (or height/breed/build) and say how much weight they could carry. You need to look at their physical condition, the work they are used to, their weight carrying technique and so on.

Looking at a couple of my horses may (or may not, who knows!) be helpful. 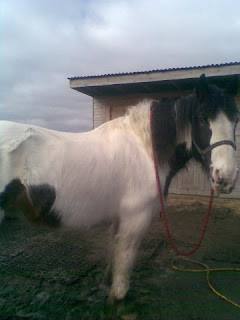 Benson is in his 20’s, is quite arthritic, and has been in light work only for years – including 2 long breaks for tendon injuries. This picture was taken after a full year of rest. You can see he is putting a lot of weight on his front end even without a rider. On a walking hack, he can comfortably carry a 13 stone person but I wouldn't ask him to carry this weight if he was trotting and cantering in the school. So I would not even ask him to carry 15% of his bodyweight.

I would however still ride him – he’s not one to exercise himself in the field, and during his extended periods of rest, he has become noticeably stiffer and more on the forehand, so I think that light hacking or light schooling with an appropriate rider is good for him. 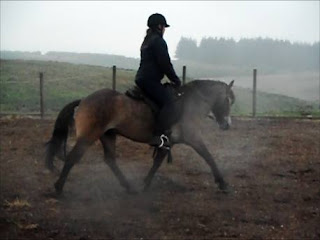 At the other extreme, Elvis the exmoor pony is in good shape physically. I don’t know his exact weight, but he’s carrying something like 20% of his body weight here, and I’m quite comfortable that that is not too much for him.

So, I don't believe there is a nice neat formula to tell you how much weight your horse can carry

The best advice I can give in this area, is the usual - listen to your horse. I only worked out percentages when I was writing this, and never think about them normally! I know, for example, that Elvis can manage my weight because he can walk, trot and canter in a forward, relaxed manner with me on his back. If he seemed to be getting tense or struggling with his work in any way, weight might or might not be the issue - and my focus would be on working out what the issue was and resolving it.
Posted by Felicity at 15:44